For a few hours, the black, starless sky opened up and upchucked rain and fiery bolts of lightning and thunder as if signaling an ominous foreshadowing of what is to come.

We barely made it back to the hotel in time, still giddy with delight from the garlicky mofongo and the best darn mojito I’ve ever had.

We turned off the TV, weary as the election returns rolled in, and a bit concerned about the weather. And America.

It made me ponder this: What is hope to the hopeless?

Hope (noun) is defined as “the feeling that what is wanted can be had or that events will turn out for the best.” In other words, it’s a belief in one’s self, in one’s circumstances, in events, maybe even in the greater context of the country or the world. It’s a belief in the good. Hope is optimistic.

Hope doesn’t always receive the best. It’s a harsh truth and it can leave us feeling crushed and downtrodden if we don’t resist those feelings and fight back.

Do you know how much courage it takes to hope for something better? When all odds are against you? Do you know that hope is what drives every alcoholic, every drug addict to take that first step into Alcoholics Anonymous and Narcotics Anonymous? Do you know it is hope that makes the heartbroken pull back the curtains and open the blinds and finally get out of bed? It is hope that allows victims of abuse to put one foot in front of the other until they are not just walking into another day, but into their healing. 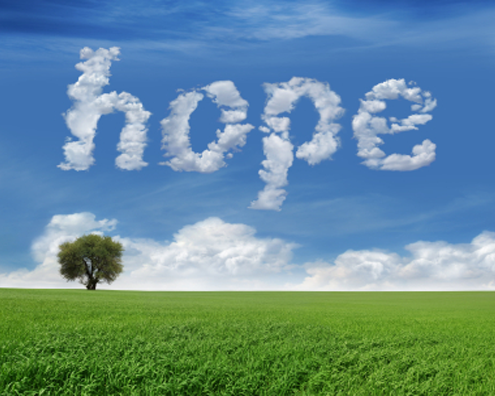 Hope is what gives prisoners peace in inhumane conditions and what gives those suffering debilitating health conditions the fight to keep going. It is what the unemployed hold onto when filling out job applications and what a mother sees when she looks into the face of her child.

Everything that has been created was first hoped. Of course, hope alone is not enough. There must be follow-up action that waters the seeds of hope to create a garden of possibility. Action without hope is a lackluster, unconvincing effort while hope without action is a fairytale.

If you take hope away, you might as well take life away, because what is life without hope? Death.

“Many people die at 25 and aren’t buried until they are 75,” said Ben Franklin. People devoid of hope.

It’s peaceful this morning. The waves are calm. The sky is bright. There’s little evidence of the storm that brewed last night.

We’re getting up to walk the beach. At times like these, I need the visible reminder of God’s love and promise, His beauty and omnipresence.

I need to go in search of His hope.