I am somewhat of an enabler. Well to be perfectly honest, I’m a full blown enabler and it just became apparently clear that it’s time I give it up. I do too much. I talk about having boundaries, but at the end of the day, the need to help people always wins out.

Unfortunately, this means I am part of the problem. I enable people’s addictive behaviors when I should be empowering them. I do it at work, when someone drops the ball and I come to the rescue, and I do it at home, when I pick up the slack for well-intentioned friends and family members who take my kindness for weakness.

I’m not alone. I’m sure if you take a good look at yourself, you share some enabling behaviors too. It’s hard not to. Caring people top the enabler list. We take our compassion for people to unhealthy levels and we contribute to the dysfunction. Repeatedly. Over and over again. We give until it hurts…all of us.

It’s no laughing matter. It’s a crisis. The enabler has helped usher in a generation of immature, irresponsible and under-achieving members of society. Because I am an enabler, the other person doesn’t have to be accountable for his/her actions. They never have to take responsibility for their own affairs. They don’t have to experience carrying the full weight of their consequences…you know, that one sure ingredient that makes us all grow up. Can you imagine living in a world where there’s no price to pay for what you say and what you do?

Enabling used to be a term used exclusively in therapy to describe people who contributed to an addict’s lifestyle by providing solutions to their behavior. Addicts, in this instance, were people addicted to alcohol or drugs or other substances. Enablers were also called co-dependents. These were people who supported an addict’s behavior and needed counseling as well. You know, they were the family members who would give the drug addict daughter $20 when she begged for it long enough or the person who’d make excuses for the alcoholic friend who missed another day at work.

But if I can put substance abuse on the side for a moment and address today’s social addiction, the new drug of choice would be self-indulgence. Yep. We’re pretty much addicted to ourselves. We’ve been called the most narcissistic society in modern history. We’ve been socialized to think about ourselves first and sometimes only. We see it so often, we’ve sorta gotten used to it. I’m no scholar on this, but I’d suspect the “me” generation ushered it in and the “selfie” generation just expanded upon it. 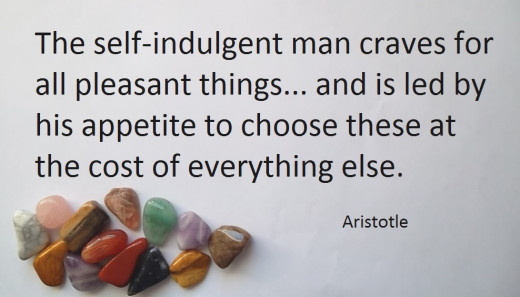 It’s the “I can do what I want and have what I want, when I want it, if I feel like it” new attitude. If my girlfriend doesn’t like it, I’ll just get another one. If my boss doesn’t approve of my vacation, I’m going anyway. If someone tells me no…what? Imagine that. Wrecked my car? My parents will buy me another. Broke my new phone? That’s what insurance is for. We no longer have to apologize to people, or repair things that we’ve destroyed. We don’t have to “wait for it” or live with the pinch of a good old fashioned rejection. Everything is replaceable, including people. It’s sad to say, but we’re addicted to pleasing ourselves. This is our new normal. The perfect breeding ground for an enabler personality, wouldn’t you say?

I’m a recovering enabler. I hope you are too.