On the day set aside for us to celebrate the Rev. Dr. Martin Luther King, Jr., I’d like to highlight some lesser known quotes from the Baptist minister, the human rights activist, defender of the poor, the downtrodden and the disenfranchised, the drum major for justice, the tireless advocate for the marginalized, the “others.”

One of the things that I love most about Dr. King, who would have turned 89 today, is that he wasn’t content just sitting in his pulpit every Sunday and preaching to church-folk. He cared less about religiosity and more about doing God’s work on Earth. He was a doer. He challenged authority. He was an activist. He walked his talk, from Selma to Washington, D.C., through non-violent protest that often landed him in prison. He broke unjust laws to change them. He could have rested on his laurels and had a comfortable life, one where he grew old with his wife and got to spend more time with his children, but he chose to put himself, and consequently his family, in the line of fire. What he did was selfless and brave and uncomfortable and burdensome (although he didn’t complain) to make the journey easier for any group on the fringes of society.

We must never forget the debt he paid. He tried to live his life like Jesus. He sacrificed for the America he had faith that we could become. He used his short time on Earth to make a big difference. He was a drum major for justice. He empowered. He fought the good fight. He spread love not hate.

Today, Dr. King is widely respected and honored but when he lived, many viewed him as a rabble-rouser and an extremist. He grew to accept the label. After all, King wrote in his “Letter from a Birmingham Jail,” “was not Jesus an extremist for love?”

Fifty years after his death, King’s words are as timely and relevant as they were during the heat of the Civil Rights Movement. This is at once prophetic and sobering. Dr. King’s words remind us of how much work remains.

Let us all spend a portion of this day considering how we can better use our time and talents to help bring about the America that Dr. King saw so vividly in his dream. He left us with a wonderful example. Let’s use it to light our own paths and to heal our nation.

The man and his prescient words:

“To ignore evil is to become an accomplice to it.”

“It may be true that the law cannot make a man love me, but it can stop him from lynching me, and I think that’s pretty important.”

“Every man of humane convictions must decide on the protest that best suits his convictions, but we must all protest.”

“The hope of a secure and livable world lies with disciplined nonconformists, who are dedicated to justice, peace and brotherhood. The trailblazers in human, academic, scientific, and religious freedom have always been nonconformists. In any cause that concerns the progress of mankind, put your faith in the nonconformist!”

“It is a cruel jest to say to a bootless man that he ought to lift himself by his own bootstraps.”

“The judgement of God is upon the church as never before. If today’s church does not capture the sacrificial spirit of the early church, it will lose its authenticity, forfeit the loyalty of millions, and be dismissed as an irrelevant social club with no meaning. Every day I meet young people whose disappointment with the church has turned into outright disgust.”

“Our lives begin to end the day we become silent about things that matter.”

“The means we use must be as pure as the ends we seek.”

“Whites, it must frankly be said, are not putting in a similar mass effort to reeducate themselves out of their racial ignorance. It is an aspect of their sense of superiority that the white people of America believe they have so little to learn. The reality of substantial investment to assist Negroes into the twentieth century, adjusting to Negro neighbors and genuine school integration, is still a nightmare for all too many white Americans…These are the deepest causes for contemporary abrasions between the races. Loose and easy language about equality, resonant resolutions about brotherhood fall pleasantly on the ear, but for the Negro there is a credibility gap he cannot overlook. He remembers that with each modest advance the white population promptly raises the argument that the Negro has come far enough. Each step forward accents an ever-present tendency to backlash.” 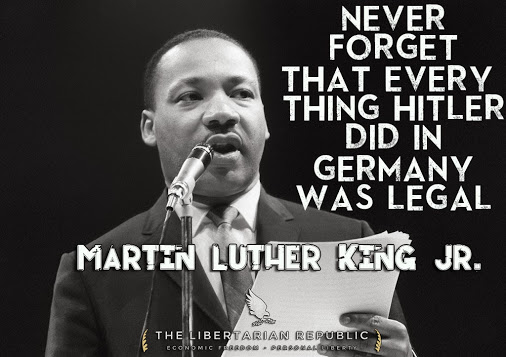 “I want to be the white man’s brother, not his brother-in-law.”