I look to see where we are on the program. After two more people, I’m next to go. I look at my watch and then glance up the hallway. Still no sign of her.

I rehearse in my mind what I’m going to say and how I’m going to say it. I want the tone to be right and to add emphasis on the parts that I practiced last night. My thoughts are interrupted by applause. The person two people in front of me of had just finished up. I feel a pang of guilt for not paying attention to her speech. Judging by the applause, it was good. Now someone is introducing the person in front of me.

Shoot! Where is she?!

Just then, she appears, looking like an angel blown in by God. My eyes glare at her but then soften and a smile works its way on my face. “Finally,” I mouthed to her, watching as she smiles and greets people at the table. She gives me that look like “I told you I was coming, didn’t I?”

“Ms. Dawn Onley …” now I’m being introduced by a classmate in the “Public Speaking with Power and Might” class at Evangel Cathedral Bible School, run by a feisty older lady named Bessie Jones. Mrs. Bessie looks over at me to make sure I’m ready. She’s been known to escort students up to the front of the class if need be. I knew there was no backing out. I collect my composure and toss what was left of my fear in the trash bin along with my Dunkin Donuts’ cup on the way up to the stage. It’s show time.

I’ve long had a fear of public speaking. I can’t pinpoint where the fear came from. When I helped to launch a magazine as its editor, I had to speak about my vision for the magazine in a room full of industry bigwigs. I was told it went well. I’ve spoken in front of hundreds of military brass. Again, no complaints. I’ve spoken at church, in front of classes, and at a scholarship awards function, and no one could guess I was nearly nauseous until I told them afterwards. When I was a child, I was always in front of a crowd or on stage. I sang “Oh Holy Night” in the Christmas play. I sang “Maybe” when my elementary school did a production of Annie and split up a few of Annie’s trademark songs between me and another girl to appease us both. I was a cheerleader, for crying out loud, and hooped, hollered and tumbled my way in front of raucous crowds to cheer on our athletes.

Yet here I stand, a few years ago, on a makeshift stage at a church in Upper Marlboro, MD forcing myself to deal with this burden. I take a deep breath, glance again at my sister, and here is what I say:

I realized I had a love affair with words when I first learned how to read. I couldn’t get enough of books and cherished the weekly visits to the library. Sure, I loved the pictures, but it was the words that I found the most captivating because the words took me places. The lessons in those words drew me in. Corduroy, Curious George, The Little Engine that Could … these stories were magical and they presented things in a way that my mind could not conceive prior to reading them.

I found stories engaging and couldn’t wait to learn how they ended. And like most kids, I had lots of questions: but why?

The more I read, the more stories I started to create in my own mind. I would create fanciful tales that usually interwove family and friends into the story line. When I got to middle school, I suddenly because interested in poetry … which is also around the time I began to notice boys. My writing themes shifted to love and attraction, embodying all of the gooey, giggly cadences of the time. Do you like me? Check no, yes, or maybe.

In high school I was thoroughly hooked on writing. The words would pour out of me, sometimes in the middle of the night. I couldn’t always grasp how strongly I felt about something until I read what I scribbled in my diary, journal, or on a napkin by my bedside. It became therapeutic to write my feelings down, and all these years later it is still what I lean on most when I’m experiencing strong emotions. My trusted tablet. My loyal pen. The light on my computer screen guiding my fingers on the keyboard. Words are my saving grace. My purpose. This is home.

In high school, I also began thinking of college and beyond, wondering how I could make a living off of this writing thing.

In college I learned to “show, don’t tell.” Words should make you feel something, my journalism professors drilled home. Words should be carefully selected to evoke meaning. Words matter. It’s not uncommon for a freelance writer to be paid per word, so it’s important that each word count.

A writer can use words to create fear in a reader’s mind. To make a reader laugh or cry. To motivate them to do something. To inspire. To incite. To calm. Words are weapons in a writer’s arsenal so it’s important for writers to exercise control. Misfires are costly.

More often than not, the writer’s life is a solemn, introverted one. Many literary works were written with a writer holed up somewhere far away from civilization — mentally, if not more than physically — painstakingly working on her craft.

The painter can paint a picture of a scenic landscape that soothes or delights. The musician can play a song in a way that moves us to tears with joy or sadness. The dancer moves to a hidden language of the soul, according to Martha Graham.

But the writer may have the toughest job of all because she must tell a story in such a way that it creates a picture in the reader’s mind, using words as her paintbrush, instrument and melody. Emily Dickinson said it best: “I know nothing in the world that has as much power as a word.”

It is crucial that we choose our words carefully – and this is a lesson that I’m still learning. One of my favorite writers, Paulo Coelho said this of words: “of all the weapons of destruction that man could invent, the most terrible – and the most powerful – was the word. Daggers and spears left traces of blood; arrows could be seen at a distance. Poisons were detected in the end and avoided. But the word managed to destroy without leaving clues.”

The Bible warns us about words and how we use them: “I tell you, on the day of judgment people will give account for every careless word they speak. For by your words, you will be justified, and by your words you will be condemned.” (Matthew 12:36-37)

Words, once thought, once spoken, once written, can only be forgiven, never forgotten. Words have the power to change us. Words help determine how far we reach, how low we fall. The words we repeatedly tell ourselves — by what we think, speak, and write — shape our future.

Watch your thoughts, they become words.

Watch your words, they become actions.

Watch your actions, they become habits.

Watch your habits, they become your character.

Watch your character, it becomes your destiny.

*Footnote: My sister approved. So did Mrs. Bessie and the class. All was well in my world. On to the next fear.* 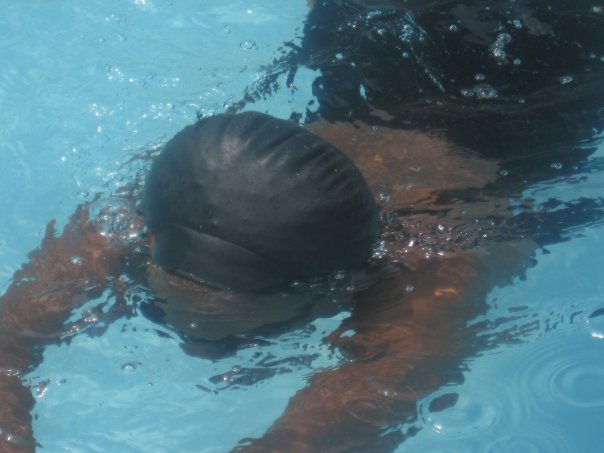